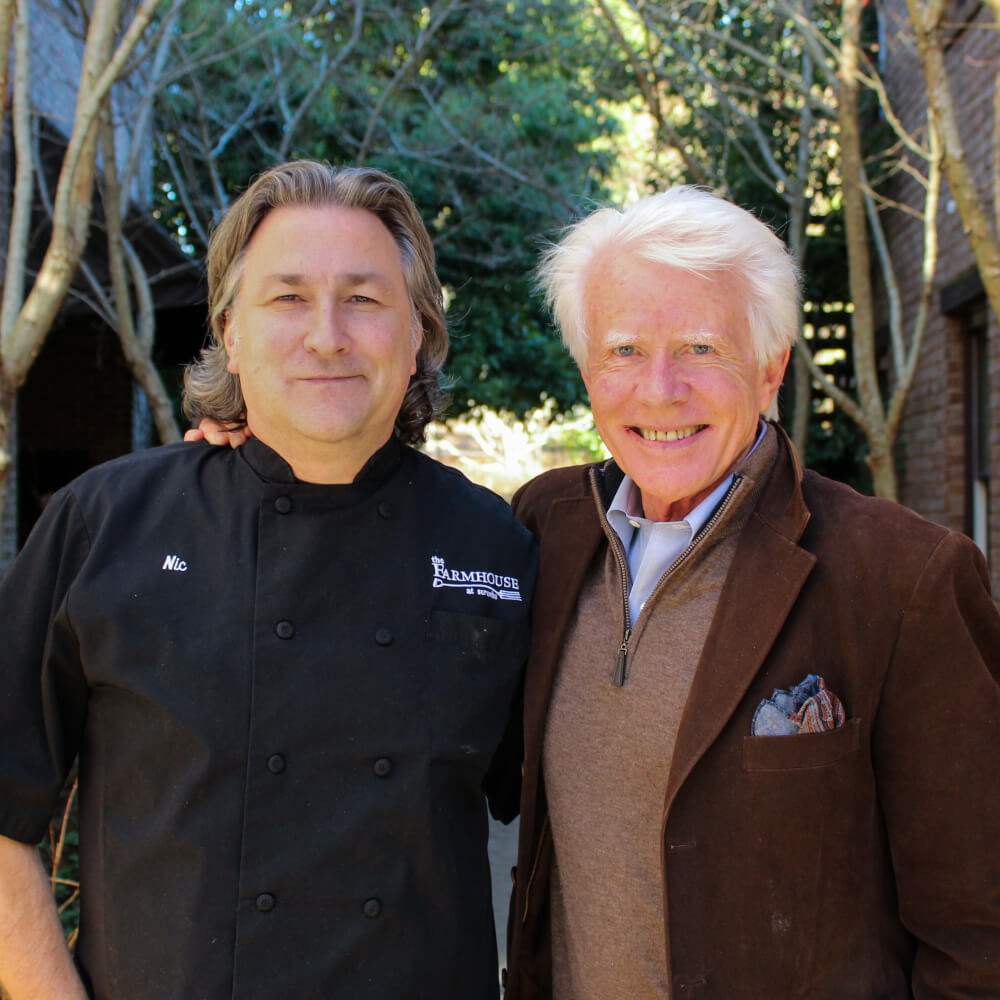 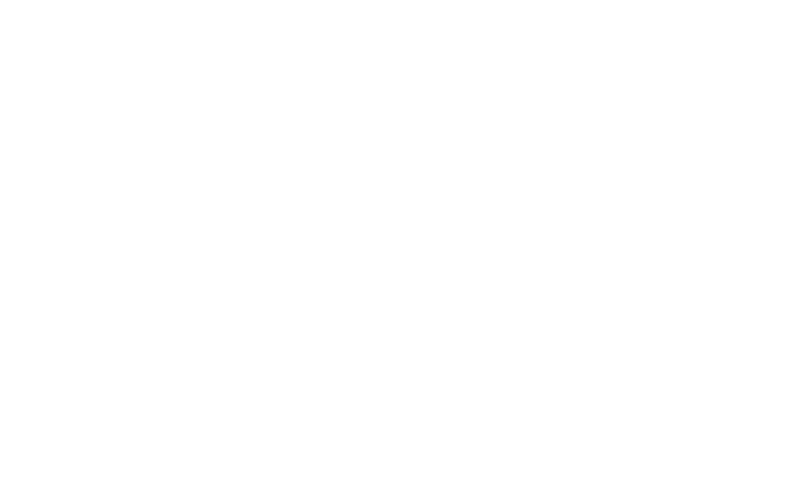 On today's episode we're talking with Chef Nicolas Bour, who was at The Farmhouse during its early years nearly a decade ago before opening the famed Iris in East Atlanta.

On today's episode we're talking with Chef Nicolas Bour, who was at The Farmhouse during its early years nearly a decade ago before opening the famed Iris in East Atlanta. He has worked in restaurants across the country and even cooked for President Barack Obama at his first inaugural gala. Chef Nic is now back at Serenbe as the executive chef and VP of Food & Beverage over all of Serenbe's restaurants. We'll talk to him about his journey back to Serenbe, his deep relationship with and passion for fresh food, and the future of culinary in Chattahoochee Hills.

Nic's Past & Present at Serenbe - 1:37
Chef Nicolas Bour has been in the industry for more than 20 years, and even led The Farmhouse Restaurant's kitchen nearly 10 years ago. When Nic left Serenbe back then, he immediately knew he'd made a mistake. In his words "you don't miss the water until the well is empty," but knowing what he would miss made his return to Serenbe extra special.

A lot of life happened in those in-between years, though. Nic always loved food and loved cooking, and remembers wilder years when he was younger. Steve thinks this can happen with chefs, because good ones are passionate people that live every aspect of their lives with zest. He's glad that Nic is back and more settled, though, and enjoys seeing the passion in his cooking. Nic is glad to be back in Serenbe too. He believes in fate and people taking care of each other, and believes it was his fate to be back in Serenbe.

Nic first learned about Serenbe through someone he was dating back then who had gone to school with Garnie Nygren. There wasn't much in Serenbe back then, but he knew it would become unlike anything he'd ever seen. His East Atlanta restaurant Iris was closing and Nic thought Serenbe would be a good fit. The timing worked out because Angie Mosier, who was The Blue Eyed Daisy's first operator, was moving on. Nic had known who Angie was and was honored to follow up. He also couldn't believe there was a LEED building in the middle of the woods.

The Daisy was the only eatery in Serenbe at that time, so it became a place that did a little bit of everything. The bake case remained, but they also served breakfast, sandwiches for lunch, and Nic got creative with dinners. His creativity is remembered even years later, and Steve tells Nic that he's a part of people's hearts here. When Nic returned to The Farmhouse in 2018, Serenbe residents got together and threw him a "welcome home" party. It touches Nic's heart, because not every job feels like a family but this one does, and he'd been searching for it.

The In-Between - 12:08
Nic looks back and sees a young guy who moved on from what Serenbe had to offer so he could live the expensive lifestyle he thought chefs lived. He'd worked for InterContinental Hotels in the past and had an opportunity to go back with them to Washington, D.C. and take over the famous Willard Hotel. Nic had the opportunity to cook for many people he'd admired over the years, including doing the Presidential Inaugural Dinner for President Barack Obama. Unfortunately, 2008 also brought the economic recession and, after 50 years of operations, the Willard Room closed.

Nick's next move was to Miami, where he reconnected with his now wife. They'd dated nearly a decade prior when Nick was working at Elizabeth's in Savannah, but she was studying fashion at SCAD and wanted to move to New York. He didn't, so she went without him. They'd kept in touch over the years, and she asked him if he wanted to date again when he went to Miami. He said no, but that he'd marry her tomorrow. Three days later, they were married and he moved with her to New York and worked as the Executive Sous Chef for the Plaza Hotel.

Nic tried the New York life but knew it wasn't for him, so when fate brought him an opportunity in San Diego, California, he couldn't pass it up. He opened three restaurants there of the course of seven years, including Loews Coronado Bay. Serenbe continued to call for him though, so when an opening appeared he made the move back to Georgia.

Coming Home - 19:17
Serenbe had grown quite a bit in the time that Nic was gone, and with new restaurants coming up Steve knew they need an executive chef that could oversee the openings of those as well as operations of existing restaurants. To him, Nic was the person that could do that.

Nic says it hasn't been easy, but "easy" is never "good." He remembers being the young chef with high passions and untampered creativity, and while he wants to nurture a creative spirit he also wants the chefs at each restaurant to come into their own. Nic references an article written about him when he was in Savannah, and remembers that someone else in the kitchen had burnt his face off and left it on their employee bulletin board. It affected him and made him want to be a different kind of chef.

Serenbe Collaborations - 24:30
There's always been a relationship between Serenbe Farms and the Serenbe restaurants, but Nic has made it much closer in his time here. He knows it's easy for chefs to be in the kitchen and not think about the farm and the growing process, but it's not the way to go. He takes the chefs over to Serenbe Farms every Wednesday to look at the fields, talk with Farmer Ian, and plan their menus around what's being grown. Ian then takes suggestions from the chefs about anything they don't see but want to be grown. The restaurant also has a composting plan, which will support the Farm's goal to be compost self-sufficient by then end of 2020.

Chef Nic also supports other local farmers within Chattahoochee Hills and surrounding towns. Sharko Farm in neighboring Fairburn practices what Nic refers to as "guerilla farming," because owner/farmer Linda Sharko utilizes vacant lots and other land in her residential neighborhood. She then has a relationship with Decimal Place Farm's cheese and has connected them with Nic and Serenbe.

Local Food Movement 30:57
Sourcing is an important topic in the local food and farm-to-table movements. The Rodale Institute is coming to Chattahoochee Hills to open a research center that will support local farmers, and Nic has a vision of this area's culinary potential. Steve sees Serenbe as building a market for good, local food whether it's under the Serenbe umbrella or throughout this region to boost the local agrarian economy.

One initiative Chef Nic has implemented in The Farmhouse's relationship with Serenbe Farms is having a person that works in both places. He thinks it's important for farmers to understand where the food is going and for chefs to understand where it came from, connecting everyone with all aspects of the food industry. Steve shares Nic's vision in educating future farmers and chefs. 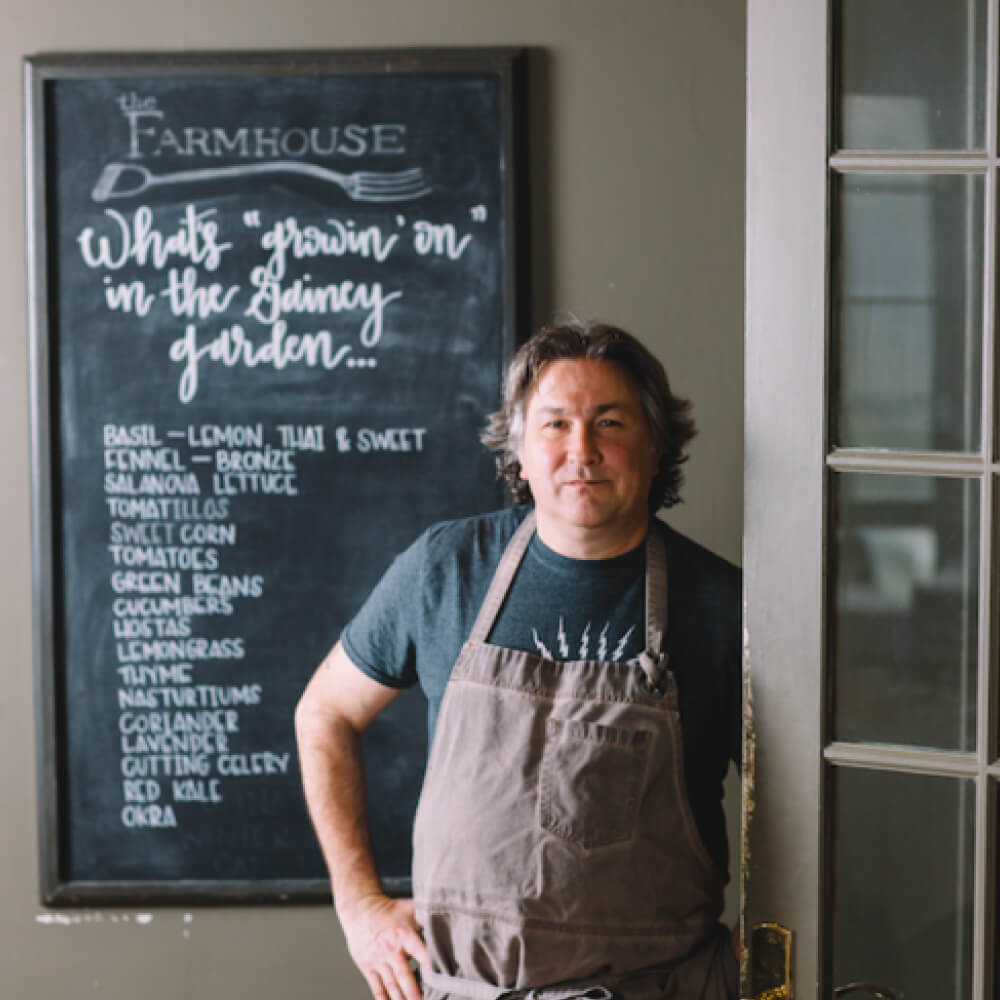 Chef Nicolas Bour has over 25 years of experience including Lowes Coronado Bay Resort, Humphrey’s (San Diego) and Ocean House (Rhode Island) among others. He also led the success of Iris Restaurant in the East Atlanta neighborhood. Bour has been highly recognized over the years, having been selected to cook for George Bush, the French Olympic Sailing Team and as a chef for The Kentucky Derby.

The Serenbe Stories podcast provides an exclusive inside look at the thriving biophilic community, from its history and development to first-hand interviews with the residents. Listen to Serenbe Stories today on any platform where podcasts are available.