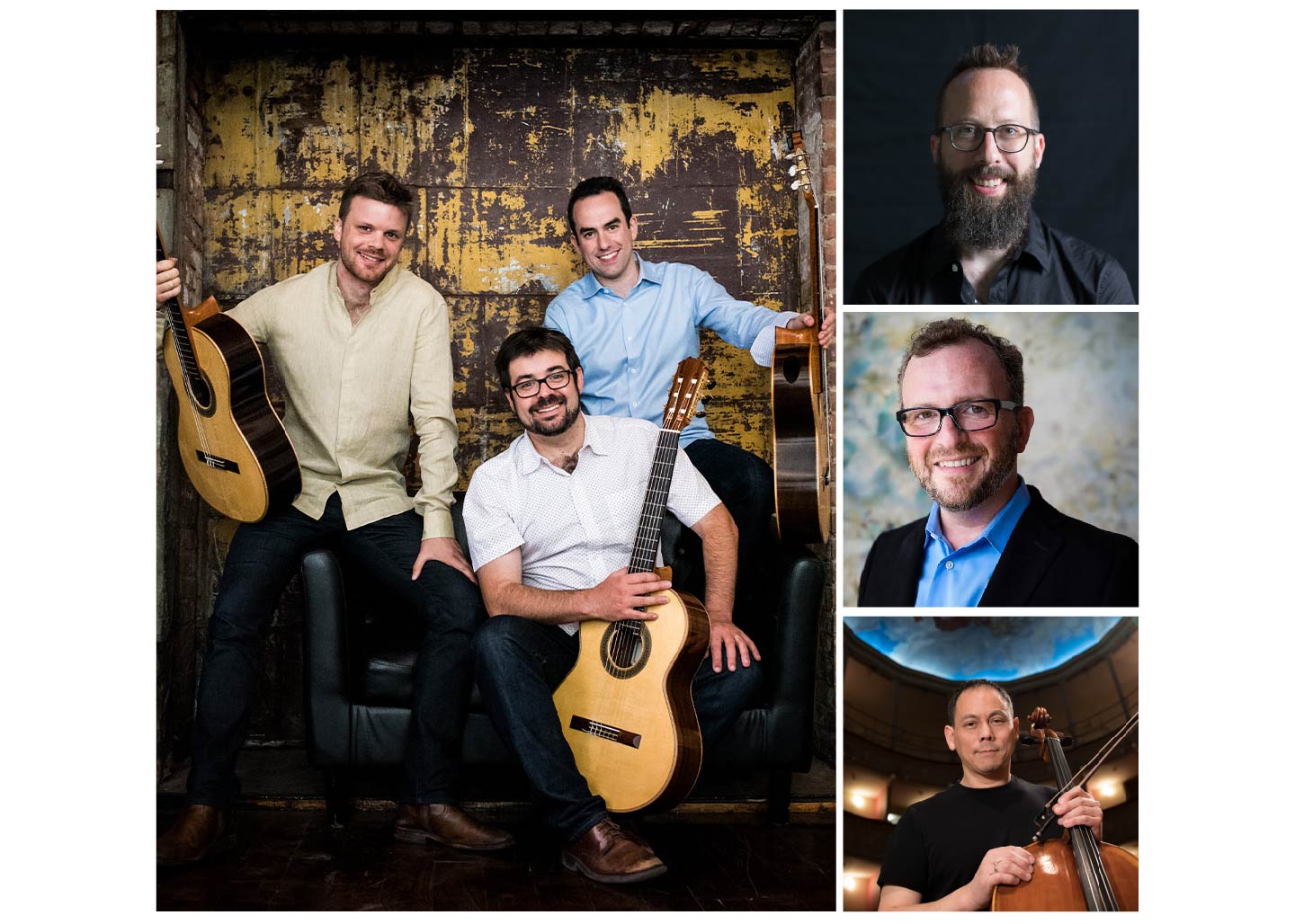 Meet The Artists of "The Lodger"

Enjoy drinks and appetizers while meeting the composer and artists who will be performing the music for Alfred Hitchcock‘s masterpiece The Lodger on Saturday, May 21. The artists includes Austin Classical Guitar Artistic Director & Composer in Residence Joseph P Williams, Cellist Bion Tsang, Professor of guitar at Columbus State University, Andrew Zohn, as well as The Great Necks Guitar Trio (Adam Levin, Matthew Rohde and Scott Borg). The Great Necks will perform selections from their newly released album, Impressions of Spain, on Navona Records. Together with Bion Tsang and Andrew Zohn, they will also give a preview of The Lodger.

Praised for his “visceral and imaginative performances” by the Washington Post, prize winning and Billboard top-charting classical guitarist and recording artist Adam Levin has performed on four continents across the globe. The recipient of numerous top prizes. In 2020, the Community of Valencia.

Inspired by our time and the myths we create, Dr. Joseph Williams II makes music centered around story and connection. The Lodger was co-presented by the Alamo Drafthouse in 2015 and 2017 and had its European premiere in 2019. His music is published by Les Productions d’OZ and championed around the world by artists such as David Russell.

Winner of an Avery Fisher Career Grant and the Bronze Medal in the International Tchaikovsky Competition, cellist Bion Tsang has appeared with the New York, Mexico City, Moscow, Busan and Hong Kong Philharmonic Orchestras, the Atlanta, Pacific, Civic, American and National Symphony Orchestras, the Hollywood Bowl Orchestra, the Saint Paul and Stuttgart Chamber Orchestras and the Taiwan National Orchestra. He has performed at numerous festivals including the Laurel Festival of the Arts, where he served as Artistic Director for ten years.

American guitarist Andrew Zohn is recognized internationally for his work as a performer, instructor, and composer. He has performed concerts on five continents as a soloist and chamber musician. A recent critic has said: Zohn…easily demonstrated how he is one of the most sought-after performers on the classical guitar as his fingers deftly plucked some of the most subtle of tones on the instrument.” Since 1999, Dr. Zohn has served on the faculty of the Schwob School of Music (Columbus State University) in Georgia, where he directs the annual CSU Guitar Symposium.

‍Matthew Rohde is a classical guitarist and music educator. As a soloist he has appeared throughout the US, Latin America, and Europe. Matthew’s original arrangements have been described as “ingeniously transferred to the guitar with spectacular results” (Classical Guitar Magazine) and “engrossing” (The Whole Note). As a film composer, Matthew composed and co-produced the score to It Will Be Chaos, a “beautifully executed” (LA Times) documentary about the challenges faced by refugees in Europe.

‍International scholarships and awards under his belt, Augustine Artist Scott Borg has been praised as a daring and innovative performer with “enormous facility on the guitar, a fluent technique, who plays with total confidence and professional expertise, panache and artful spontaneity.” New York Concert Review described his Carnegie Hall debut as gracefully presented, and expertly played…each note was purposeful. He received his Doctorate of Musical Arts (New England Conservatory), Artist Diploma, Masters of Music (The Juilliard School), and a Bachelor of Creative Arts with First Class Honors (University of Wollongong) graduating valedictorian.